OFTEN REFERRED TO AS “THE Gateway to the Beach,” Conway has long been more than just a rest stop for residents on their way to the Grand Strand. Conway is a thriving town and one of South Carolina-s top inland retirement destinations.

“Conway offers a full calendar of community events, including The Rivertown Jazz and Arts Festival and the Blue Grass on the Waccamaw Festival.”

One of the oldest towns in South Carolina, Conway, located about 12 miles northwest of Myrtle Beach, was established in 1734 on a bluff overlooking the Waccamaw River in the center of what is now Horry County. The town originally was called Kingston, but its name was changed to Conwayborough, after Gen. Robert Conway, who led American troops during the Revolutionary War, and later shortened to Conway. 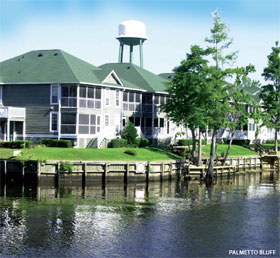 A bustling river port since the 1820s, Conway became a trade center for the lumber industry in the years following the Civil War, and, later, tobacco was an important crop in the area. The railroad arrived in 1887, and, 11 years later, Conway elected its first mayor, Col. C.P. Quattlebaum.

The residents of Conway have worked hard to maintain the small-town sense of community that has long been associated with the city. As proof that history is a priority, there are 39 historic sites in the area, 17 of which are on the National Register of Historic Places. The town features a quaint, tree-lined business district and several classically restored antebellum plantations.

Based on its record of planting and protecting trees, especially its giant, moss-laden oaks, Conway has been recognized as a Tree City USA.

Conway residents are proud of their past, but they also have an eye on the future. The city-s updated riverfront features an 850-foot boardwalk that offers a scenic view of the Waccamaw. A riverboat, the Kingston Lady, departs from the Conway Marina, offering a narrated tour, and you can rent canoes or pontoon boats and explore the Waccamaw and its tributaries on your own.

Conway offers a full calendar of community events, including The Rivertown Jazz and Arts Festival and the Blue Grass on the Waccamaw Festival. Conway also hosts one of the largest Christmas parades in the region.